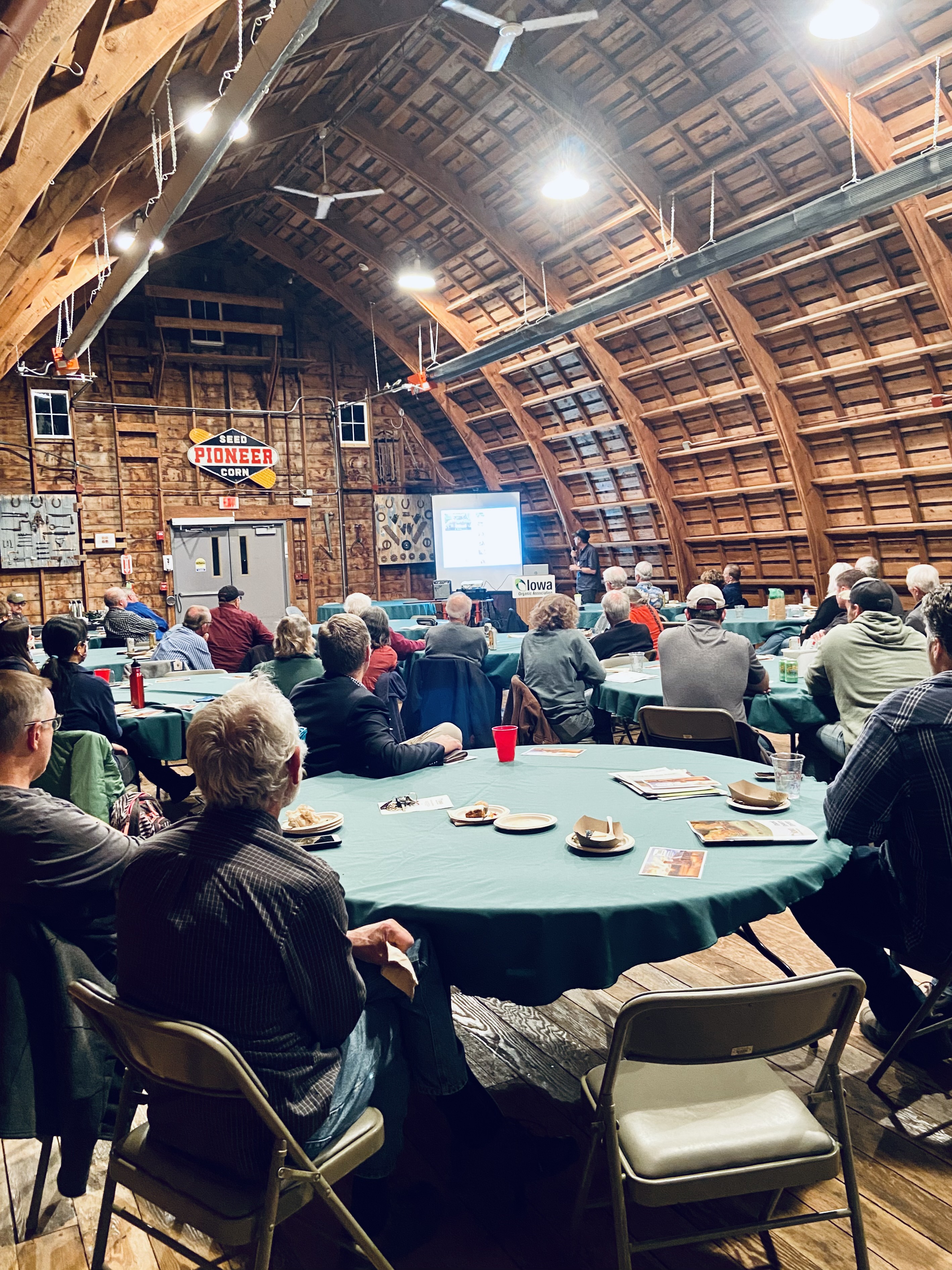 On Thursday, December 9, 2021, IOA hosted the 2021 IOA Annual Meeting in Johnston. Dr. Joel Gruver and the Farmer Panel were excellent – they provided a wide-range of organic information, experience and resources for those in attendance.  The evening was just the right amount of great company, food, spirit and organic education.  We hope you join us next year!

We also celebrated the service and leadership of two very special people to IOA and Iowa’s organic community.  Kent Boyum, Ph.D. and Patti Naylor are both stepping down from their role as IOA Directors, however, they will continue to remain near and dear to our community and future ambitions. 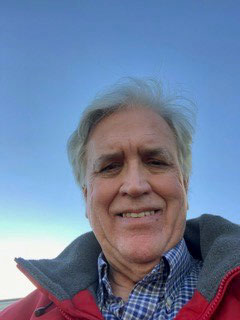 Kent has served with IOA for 18 years, since before it was the Iowa Organic Association. We are truly grateful to Kent and the other founding pioneers of this organization for laying a foundation for organic representation in Iowa that still exists today!  You can find Kent in the Maharishi Vedic City where he is the Director of Economic Development and Government Relations, and manages the Maharishi World Peace Vedic Organics, a three-acre USDA certified organic vegetable and flower greenhouse operation. 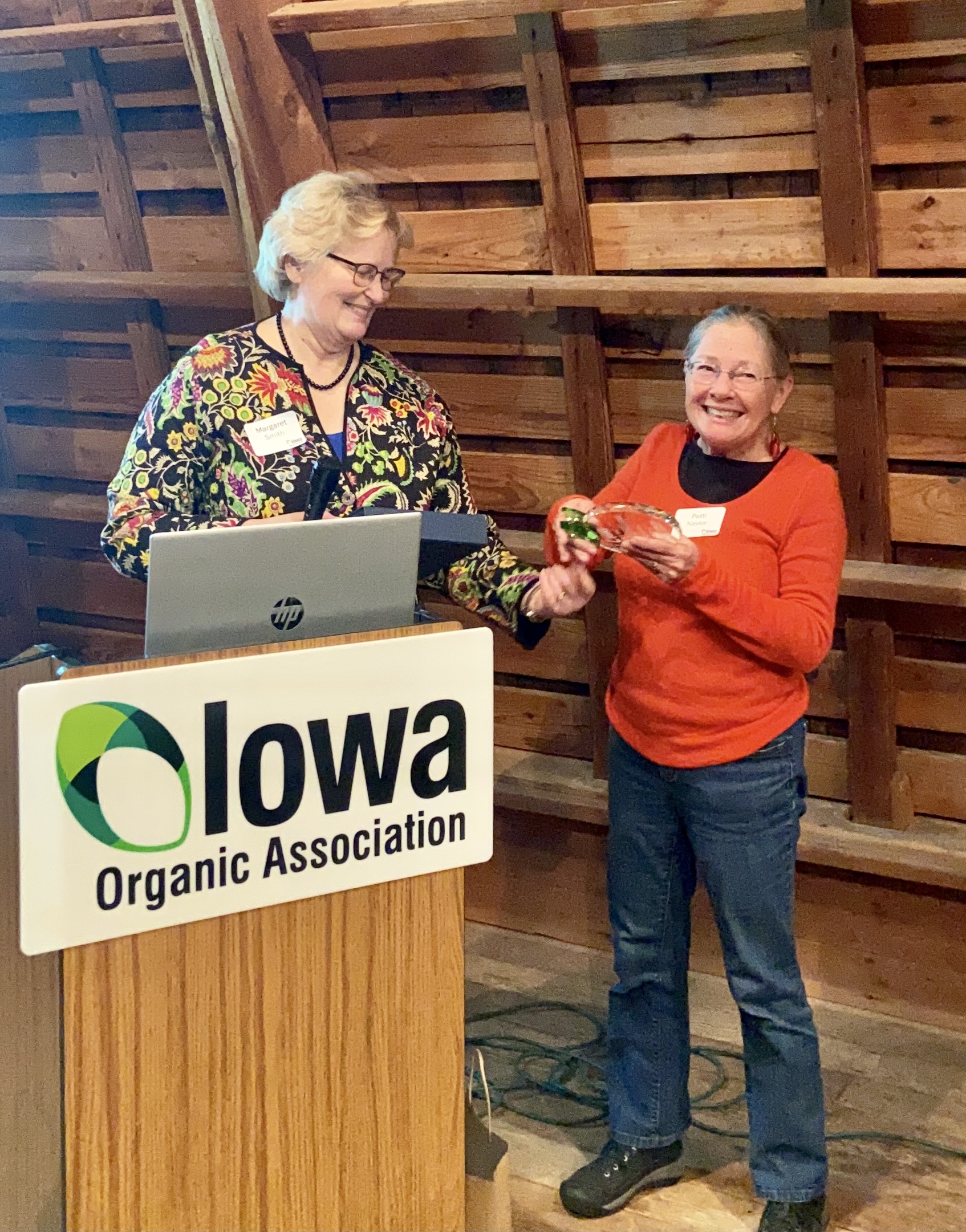 Patti has served with IOA since 2019 and is a trailblazer in the food and farm justice movement.  Patti provided meaningful insight and direction that strengthened our work and mission.  Patti farms with her husband, George, in Churdan. They grow organic corn, soybeans, oats, hay, cider apples, and chickens. Patti and George also write on their blog clarityonparity.com.

We are also welcoming back two board members who were re-elected at the Annual Meeting.  Congratulations and thank you for your continued service to both Eric Madsen (Atlantic) and Paul Mugge (Sutherland).  Both Eric and Paul provide valuable experience and representation for organic in Iowa.

The commitment, vision and dedication of our volunteer board members are invaluable to growing and strengthening the organic movement in Iowa.  Thank you for sharing your time, talents and commitment to growing awareness and support for organic production and practices.

If you or someone you know is interested in serving on the IOA board and representing organic interests in your community and for Iowa – please email Roz for an application. 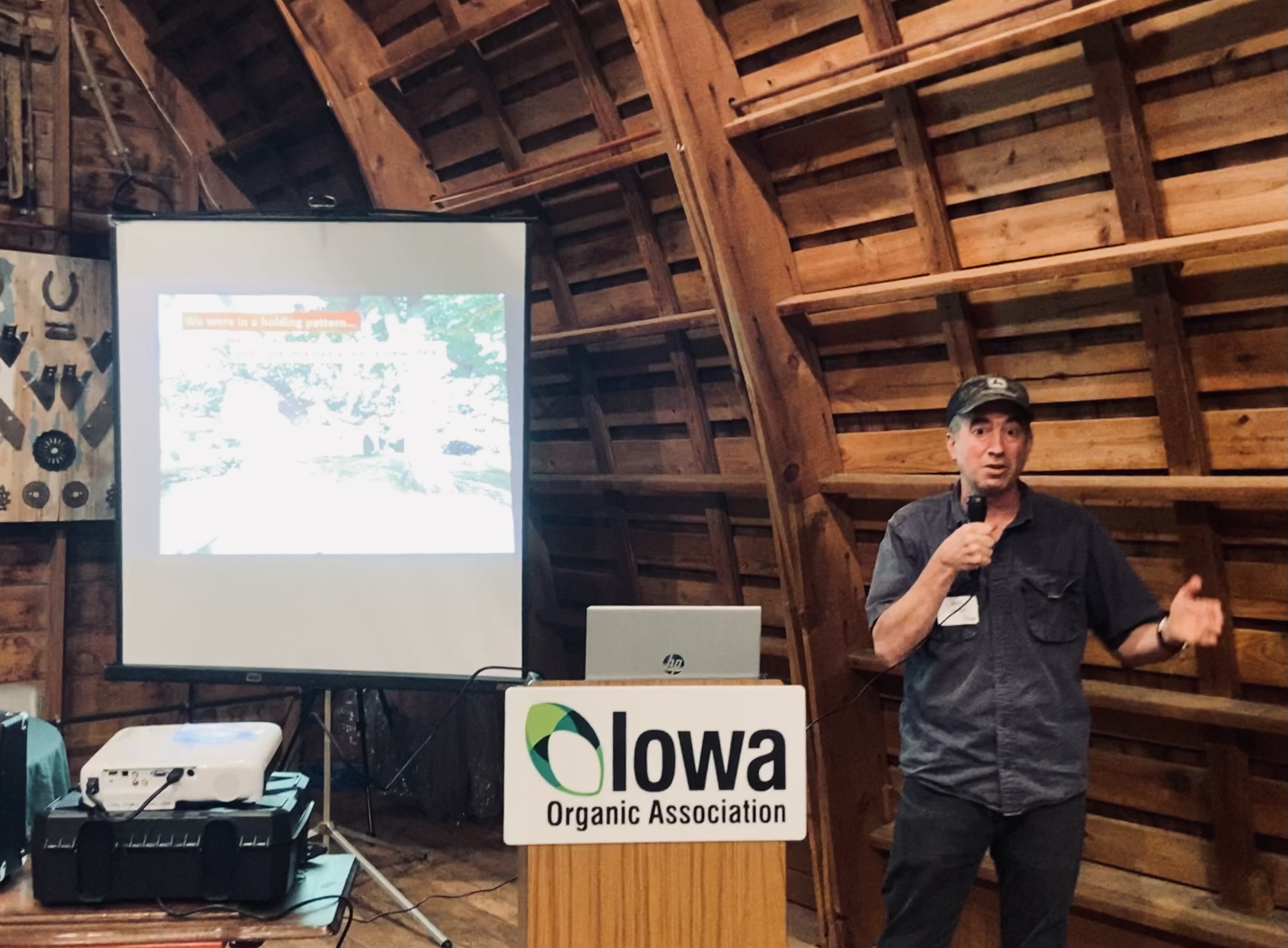 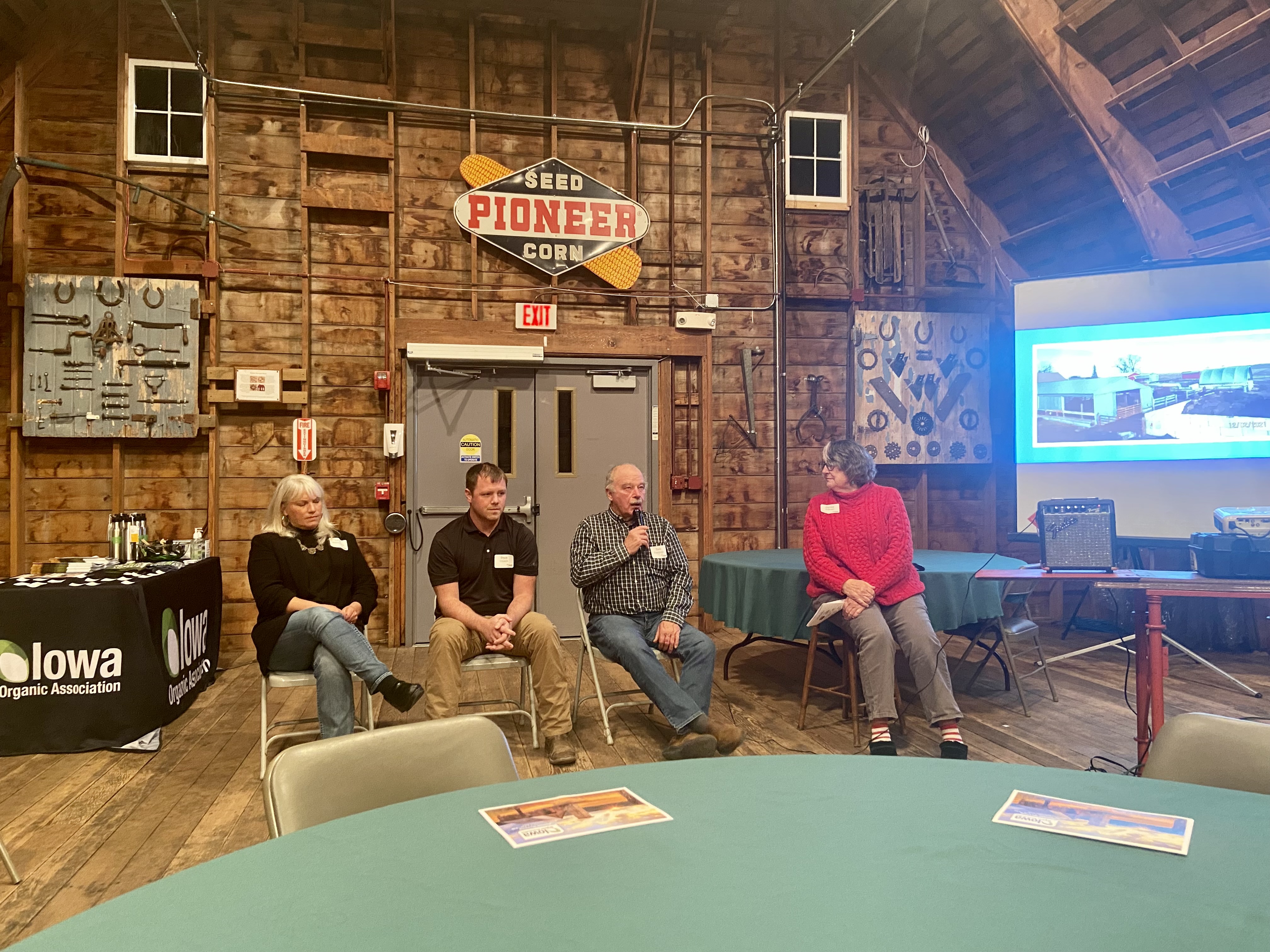 Thank you to ALL for your support in making the Annual Meeting a fun event!

Joel Gruver, PhD, is the Associate Professor of Soil Science and Sustainable Ag, Allison Farm at Western Illinois University.  Dr. Gruver earned his BS in Chemistry from Principia College in Elsah, Illinois, his MS in Agronomy from the University of Maryland in College Park, and his PhD in Soil Science from North Carolina State University in Raleigh. In addition to teaching a range of soil-focused courses, Dr. Gruver is the Director of the WIU Organic Research Program. He received the National No-Till Educator of the Year Award in 2015. His research interests include conservation cropping systems with a focus on cover crops and organic grain production, soil organic matter, and innovative teaching methods.

Farming since 1974, Tom and Irene Frantzen own and operate a 320 acre diverse certified organic farm in NE Iowa. The Frantzen Farm grows, corn, soybeans, small grains, including hybrid rye, hay and pasture. Much of these crops are used for livestock feed. They also have 40 head finished beef cattle and a 40 sow farrow to finish operation, being the first members of Organic Prairie Pork program for Organic Valley CROPP Coop. They’ve also been longtime members of the CROPP Beef program. Being certified organic for well over 20 years, Tom has gained much knowledge and is always willing to share his experiences. The Frantzen’s were past recipients of the MOSES Farmer of the Year in 2009.

Linda Wattonville was born in northwest Iowa, lived half her life in Texas, and currently resides on a small organic, pasture-centered farm near Ankeny, where she and her family grow fruits, herbs, vegetables and naturally breed and raise sheep, cows and laying hens. Operating on the premise that living soil and chemical-free food is the foundation of health, the family and their animals eat organically and locally.

Linda's focus on the mother’s role in wellness stems from her journey into nutrition for her two daughters, one of whom suffered extreme gut issues. After yielding positive results for the whole family, the Wattonvilles applied their principles to their sheep, to improve the flock’s overall well-being. Now, using regenerative practices, they compost the organic barn waste to make soil for fertilizing garden and pastures. To Linda, growing organic represents a change in perspective and lifestyle that she embraces, and that she feels is needed for society to achieve health, vitality and sustainability.

Bryce Irlbeck, Owner of B&B Irlbeck Farms and founder of AgriSecure, a technology platform to help organic farmers manage a systems-based organic operation. Bryce now runs a 4,000 acre organic operation with his dad where they grow alfalfa, corn, soybeans, peas, barley, canola, and rye. Recognizing that his organic farm was succeeding while many others struggled, Bryce founded AgriSecure in 2018 to help farmers in his community and beyond learn how to profit from organic farming too.

Denise O'Brien is an organic farmer at Rolling Acres in Atlantic, Iowa and serves on the board of the Iowa Organic Association.  Denise and her husband, Larry Harris, have been involved with organic production and cultivating local food for over 45 years. Denise is also a co-founder of Women Food and Agriculture Network, was a candidate for Iowa Secretary of Agriculture in 2006, and a USDA agriculture adviser in Afghanistan in 2011. In 2011 she was the recipient of the Rodale Institute’s 2021 Organic Pioneer Award.